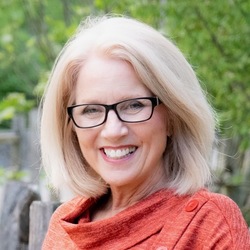 Judy K Herman helps families and leaders change complaints into cooperation in their 9-5 jobs and 24/7 lives. She’s been doing that all her life at various stages from her family of origin to 40 years of marital experiences with two husbands (not at the same time.)

Her second career as a psychotherapist specializing in relationships followed seasons of homeschooling her four (now adult) children.

The book and podcast have become “therapy beyond the four walls of her counseling office.” Judy is among the top 3 marriage counselors in Chattanooga. She is licensed in Tennessee and Georgia. Her innovative counseling and coaching includes virtual and outdoor retreat packages.

When she’s not having backyard adventures with her 5 young grandchildren, you can find her exploring her own adventures. Part of that is honing her craft as a speaker and writer. The other part is international travel along with facilitating retreats and mastermind groups.

You can find her on LinkedIn/JudyKHerman and her website: judycounselor.com

First of all, here's what you can expect from me:

✓ Professional replies to your phone calls and messages.

✓ A personal phone webcam consultation directly with me so I can better understand how to serve you and your audience.

✓ Announcements about your event on my social media channels and website. (assuming that your event is open to the public.)

✓ A professionally prepared, clear, and dynamically delivered presentation focused on the outcome you desire with your audience.

✓ A custom resource page, exclusively created for your attendees.

✓ A quick follow-up communication after the event to make sure I met your expectations and feedback for ways I can improve.

🎙 I love the energy of speaking online and live stages and captivating audiences. My "love tank" is filled when I hear someone randomly tell me, "Your speaking from years ago changed my life." Or some have said, "I remember when you said _________________ and I've never forgotten it."

My voice as a seasoned counselor/speaker, moderator, and facilitator continues to bring me even more depths of transformation as it does for those who hear. I'm energized to know that my life's experiences along with my professional career has a bigger impact than I imagined. It's exciting to be a part of helping others to know their dignity, value, and worthiness!

I had to face the possibility that my clients would read my book and say to me, “And why are we seeing her as our therapist?”

My self-awareness increased. Growth was inevitable. It required risks of tough decisions.

I had to take deep breaths of A.I.R. . . Awareness, Intentions, and Risks.

This turning point made me realize. Many couples are not living together. They're dying together.

What will you choose? Your vibrantly authentic life is inside you waiting to be released. You ARE worth the journey! There's a bigger purpose beyond your present circumstances.

It's time you become your own advocate. It’s your very life we’re fighting for. We all need fresh A.I.R. - Awareness, Intentionality, and Risks of growth.

Opening up your awareness. . . your commitment to get out of a toxic relationship dance IS a tough decision.

Be of good courage. It takes many deep breaths of A.I.R.

Save yourself. Live your beautiful life to the fullest!

You are worth saving. You cannot do for others what only they can do for themselves.

And now, you have a choice. Cultivate the reality that you are worthy of dignity, love, and respect.

Ever since childhood, relationships have sparked curiosity.

As the second born of four children in my family, there were multiples of four in past generations.

Then the pattern was broken when a fifth grandchild was born!

Being a psychotherapist specializing in relationships is a second career. The first was raising four remarkable humans in a challenging marriage that lasted three decades. With husband #2, we were "Mimi & Papi Joe" to the grandchildren who loved to visit and swing on the tire swing.

His mental illness was more severe than ever imagined. He was responsible to take his medications and keep his appointments. He even facilitated bipolar support groups. Then his break with reality was the catalyst for me to write "Beyond Messy Relationships."

As he recovered and became my biggest cheerleader in writing, we all celebrated the book's release in 2019.
Just when we planned a better future, it happened again. We had spent Mother's Day of 2020 together. That evening he sat me down and said, "Judy, I need to go to the hospital."

He left and never came back in his right mind.

For years I feared becoming a widow or a "twice divorced" relationship therapist. But now the terms have changed.

My entire life and career has been invested in figuring out relationships. Every trauma has become an awakening and tuning into a higher calling. Hearing the inside struggles of clients have reinforced the reality that none of us are alone.

The "divine invitations" included two successful marriages. Yes, they both came to what I now call "natural completions." It was a miracle that the second marriage lasted as long as it did with the severity of illness it endured.

The former husbands are not "Xs." They deserve dignity and honor. After all, one marriage birthed four (now grown adults) who have become remarkable parents themselves. The other marriage birthed a book that's had greater impact than ever imagined.

It took two husbands and 40 years of marital experiences for the courage to live this beautiful and vibrantly authentic life. It's appropriate to be an "uncoupled" woman who is so much more than a mother, speaker, or couples' therapist.

We are more than our roles in life or initials behind our names. We all are deeply loved, valued, and worthy of respect.

From Calm To Chaos: Strategies for Successful Interactions

This high-energy interactive presentation is a great kick-off to any conference. Recently presented for the TN Appointed & Elected Court Clerks Conference. The rhythm and familiarity of the Beach Boys segues into the practical neuroscience of emotional and mental wellness. Potent and vulnerable stories bring inspiration to the surface of our common humanity.

The accompanying breakout session after this keynote is especially effective. It's entitled:
From Chaos to Calm: Strategies for Successful Interactions

Comments from participants include most valuable part was:

Presented as a breakout or keynote for Corporations, Associations, and Leadership Summits

This psycho-educational multi-media presentation includes lecture, guided meditation, role-play and short video clips. Participants gain skills from Judy's formula for wisdom and insight. By calming the nervous system through deep breaths of A.I.R. you become attuned to the acronym. Awareness, Intentionality, and Risks of growth.

Judy shows us what vibrant authenticity looks like beyond her own messy relationships. As a psychotherapist to high-level executives, she normalizes the struggle of our human journey.

The catalyst for writing her book, "Beyond Messy Relationships" was her former husband's second season of psychosis. Judy brings hope to participants along with practical applications. Presented in a high-energy and light-hearted way, some have said, this is even better than therapy! Although we'll include a disclaimer that it's not a substitute for professional counseling.

1. Describe and give practical examples for the acronym AIR.

3. Name the five "normal" horsemen that keep us stuck in relationship messes and why peer support is essential.

This talk can be adapted for churches, retreats, and non-profit organizations

5 Tips for Navigating Relationships During COVID19: Transitioning with Vulnerability

This can be online, on stage, or in a workshop format.

Dialogue for Well-being: The Art of Holding Tension in the midst of Differences

When Personal Crisis Hits: How to Survive and Thrive in the Midst of Helping Others

Demonstrate ability to apply coping strategies using the formula AIR, awareness, intentionality, and risk.
Gain skills for self-care as mental health counselors. (can be applied to other leadership positions in organizations)
Prepare to view crisis situations as “divine appointments” for authentic and personal growth.

Modeling Authenticity in the Counseling Room

This talk is designed for graduate level counseling programs. But it can be adapted to address other types of leadership training and coaching programs.

It’s challenging to have professional boundaries and show up authentically with clients. Is self-disclosure appropriate in some cases? Learn techniques, attitudes, warning signs, and mistakes to avoid. What was discussed:

(for church events)
High energy multi-media 4-week series packed with practical tips on improving family relationships. Attendees learned how and why relationships are vital to physical, spiritual, and emotional well-being as well as a simple formula for turning difficult circumstances into divine appointments.

Week # 1 – What Every Relationship Needs No Matter What Generation You’re In
Week # 2 – What You Need To Avoid – The Four Horsemen Of Relationships
Week # 3 – How To Be a Sprinkler Instead of A Vacuum Cleaner – Being Emotionally Safe
Week # 4 – How to Meet God Through Another’s Differences, Even When They’re Way Off Base

How to Be Your Authentic Self in a Difficult Relationship

Your difficult relationship may be your mother-in-law, your significant other, your ex, or your spouse. This 90-minute teaching is packed with practical tools to give you clarity and skills to show up as the real you. You’ll be able to focus on what matters most.

To recover from a regrettable incident.
To use the formula for clarity – AIR: Awareness, Intentionality, Risks
To know when it’s time to get outside help

Each participant will receive a signed copy of “Beyond Messy Relationships.”

Beyond Messy Relationships & Into Your Vibrantly Authentic Life

This moment in time is a divine invitation. And even though we are across the screen, I recognize that you are worthy of dignity, love, and respect.

This speech was my 10 minute segment in honor of International Women's Day. Along with 19 other women around the world, we are sharing our passion and messages of transformation.

I share a simple and profound formula that's transformed hundreds of my clients and has the potential for getting you into your vibrantly authentic life.

Just copy and paste this link to watch the 10 minute talk: https://youtu.be/ec2HFl8RCY0